This term I took my ten year old out of school and registered myself as a home educator. I am a single working parent paying off a mortgage, so this was a pretty big step. I was homeschooled for part of my own primary schooling, I like creating (and rebelling against) systems and had always imagined that I could teach my child at home, but how to do this and also keep my job? Why go to such effort when there is a cheap school around the corner? 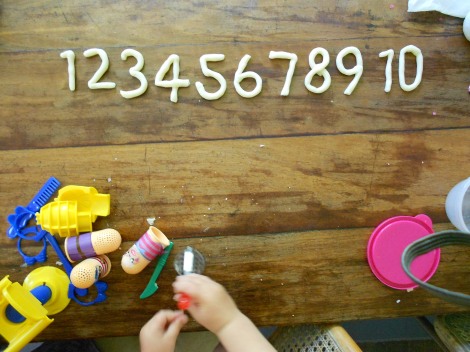 Rolling playdough numbers when my son was a toddler.

Up until this year, homeschooling hasn’t been an option for two reasons. Firstly, my child is a really intense little person. Even though I had dreams of happy family learning, as a single parent the reality was that it was a welcome breather for someone else to deal with my small tornado for a few days a week. Even a private school began to look like extremely cheap childcare. It was respite for me. And secondly, the logistics of how to juggle part-time employment with full-time educating.

I like my job, and it is a lot easier to pay off a house whilst earning regular wages, so I am not investigating work from home options at the moment. I currently only work 3 short days per week, which is enough to boost my income and complete projects effectively, yet also have most of the week at home and be able to distribute the load of childminding/educating on my work days between a few close family and friends without overstretching their resources. 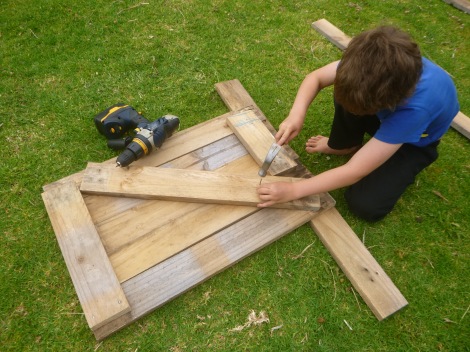 Teaching himself how to make a door for his cubby last year.

I want my son to be able to spend the whole day building cubbies in the backyard.

I want my son to believe in himself.

I want to be able to scaffold my son’s executive functioning for a bit longer, until he catches up to his peers, without it affecting his self esteem.

I want to encourage my son to fully explore his passions and to extend the depth of his learning.

I want to be present to co-regulate my son’s extreme emotions and to know what triggers him, and what people are saying to him.

I want to be able to adjust the stimulation level of my son’s learning environment to reduce stress on him and minimise distractions.

I want to model and actively teach self-regulation, mindfulness and respectful communication.

I want to provide a solid base for my son to launch himself from. 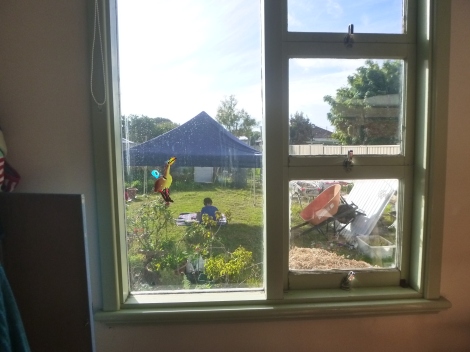 Despite excellent teachers, friendly peers and useful systems, the two schools we tried couldn’t accommodate my son’s intense needs and his self esteem was plummeting. My child was under so much pressure trying to keep up socially and emotionally that his grades were steadily declining, and I was getting constant phone calls from the school admin about his conduct. By the time he was formally diagnosed with ADHD in grade four and subsequently medicated, he already had an established reputation as the disruptive, volatile kid.

I had engaged counsellors (for myself and him), paediatricians, doctors, naturopaths, a paediatric neurologist, and the school psychologist. I had tried diets, aromatherapy, herbs, kinesiology, flower essences, lots of parenting strategies and neurofeedback. Nothing made much difference apart from medication, and that broke my heart. I don’t believe in medicating active little boys just to make them sit still in class all day long. But this wasn’t about being compliant in class. It wasn’t about a lack of boundaries at home. It was about screaming at me, brandishing knives and wanting to die. It was about running away from school on a whim one lunchtime and trying to walk home, when home was 30 kilometres away. It was about watching all my son’s friends avoid him at school camp, because he always loses his temper playing ball games so they have stopped inviting him to play. It was about watching him swing his angry outbursts back towards himself, and crying himself to sleep because he’s hurt his friends at school. It was about me extrapolating to when he’s 18 and has a car and a girlfriend and alcohol. I cried the night I bought his first packet of tablets, but it has given him a window of feeling calm and focused during the day. And another medication that he started recently has vastly modulated his emotional peaks and troughs to a rational, manageable level. Down the track, I may explore options other than medication, but for now it is a core part of enabling me to contemplate having him at home all day (or at work with me, or sending him to spend a day with friends). Medication is about functioning and survival. 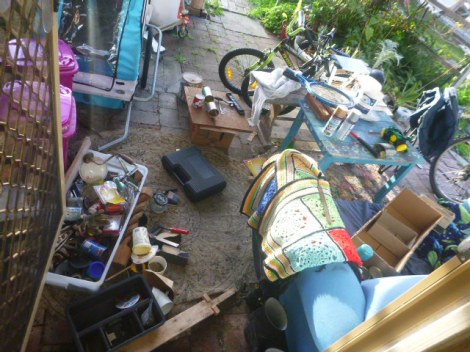 The maze of half-finished projects outside my back door. I put it away. He gets it all out again.

He’s been on medication for over a year now, and the school system was still struggling to manage his behaviour. Taking my son out of school is the best way I can see right now to keep him alive, and reduce the risk of harm to those around him. Every year since he was 3, I have received calls from his school about another child being injured by my child. Medication alone can’t fix his reputation or heal his self image. My main focus for the next year is not academic skills, but self-regulation and self-esteem. And for this, he needs to be in a safe place with adults he trusts, and to be given achievable steps towards self-management with lots of small successes. The teen years are still a few years away, but I feel the urgency of imparting self-regulation skills very keenly, now, before he grows into a man’s body and strength. Especially as a single mother of a boy. 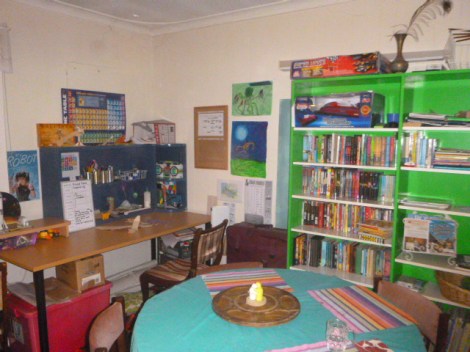 So we find ourselves on the adventure of homeschooling. Another appeal, for me, is the freedom to design the rhythm and content of our days, adapting the curriculum to his interests and what I think is important. To spend more time on what I wish I’d learned in school. Already, he is thriving with more responsibility and choice. Together we are gently exploring routines, resources and the vibrant local homeschool network. My family, his father, the teacher at his last school and my friends have been wonderfully supportive. I’m grateful to have a good support network that makes this a viable choice for us.

8 responses to “Why We’re Homeschooling”