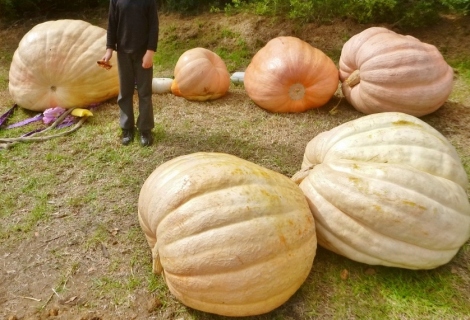 It’s time to plant your pumpkins in temperate Australia. Last year we grew giant pumpkins for the local Pumpkin Festival (then I attended the Australasian Permaculture Convergence instead and there was no one to take my pumpkin to the fair – I tried to arrange a pumpkin proxy but despite my phone calls from airports en route the pumpkin remained solidly in my backyard). The pumpkins above are from the 2017 Pumpkin Festival.

Anyway. Giant pumpkins aren’t for eating. I tried to save some seed last year but it was sprouting inside the pumpkin shell. This year we are going to grow some eating pumpkins, but we have learnt from last year’s pumpkin patch.

The giant pumpkin seedling was given to me in December and I didn’t have a suitable garden bed ready for it. So I decided to make one, cheaply and without building any permanent structures. I haven’t decided where I’m placing all the garden beds in the backyard yet. Giant pumpkins have giant seeds and giant seedlings!

I bought two bags of sheep poo for $12 and picked up some free cardboard boxes. I had some garden soil mix, woodchips and bales of pea straw already. I hauled it all to the back corner of the yard, where there was a pile of weeds and nasturtiums.

I laid out overlapping cardboard over the kikuyu grass and set out four straw bales on top in a rectangle. My big woodchip pile was right next to this area. I laid the cardboard right up to the woodchips, and forked woodchip mulch around the bales with a little bit inside as well. I watered it well to wet the woodchips and straw. It’s important to water layered beds as you build them, because it can be hard to soak it properly afterwards.

I poured two bags of sheep poo straight in. I put them at the bottom because sheep poo has weed seeds in it. Then I covered it with a good layer of soil, to give the pumpkin seedling something to plant into and to suppress the weed seeds. I kept watering well, filling up the soil area with water and letting it soak in. 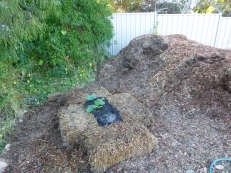 I planted the giant pumpkin seedling into the middle of the bed. I couldn’t help planting a spare watermelon seedling next to it, because it looked like such a lot of nutrients, but this was quickly overgrown and swallowed up by the pumpkin plant. The weedy corner looked neater already. 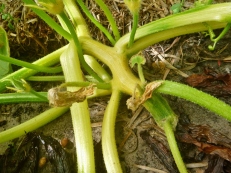 As the pumpkin grew, it had yellow streaks on the leaves and along the stems. This may have been from the intense manure layer it was growing in, or maybe a virus. There’s a guide to giant pumpkin leaf health here, but I don’t see anything that matches my vine.

After about a month the vine started producing little fruits. Some of them yellowed and dropped off, but then they began to set and grow larger.

Here’s the poor watermelon trying to poke a leaf up to the light. The pumpkin had it in a stranglehold underneath. 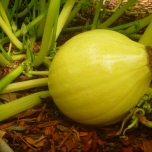 Because we were trying to grow the biggest pumpkin possible, we cut off all but one pumpkin. We ate some of the immature fruit like zucchini and fed some to the chickens. Pumpkin leaves are edible too, but hairy, and I wasn’t that desperate. Baby pumpkins kept forming and I had to keep snapping them off. This put all the energy of the plant into the single fruit.

Jackie French suggests filling a container with one part urine and nine parts water, and inserting a cotton wick from the liquid straight into the stem behind the pumpkin you want to supersize. Intravenous feeding. I didn’t get around to trying this.

Do you know how to tell the difference between male and female flowers? Females have three parts in the middle, and a swelling behind like a pregnant belly. Males have a phallic pistil in the middle of the flower and no swelling. If the bees aren’t pollinating your pumpkins (or melons or other curcubits) you can do the job yourself by spreading the pollen from male to female flowers with a soft paintbrush, or break off a male flower and insert it into the female flowers. Sex in the pumpkin patch!

By March, the giant pumpkin had matured into a decent little giant, and the vine was dying off. We had a household mulching session and finished laying cardboard and woodchips around the rest of the weedy corner. I rolled the pumpkin onto a piece of wood to try to stop it rotting, but because I was away for several weeks in autumn I wasn’t able to monitor it closely enough and it began to go soft, leading to unpleasant experiences for whoever tried to pick it up.

Once the top had caved in, autumn rains finished the job, and I was only able to scrounge some seed from the pumpkin cavity after many of them had already begun sprouting. So I don’t know if any of them remain viable. I was hoping that some seed might lay dormant on the ground until this year, but looking now (October) I can see lots of opened seed cases where the seed probably sprouted and then died in the cold winter. It may have been nibbled by guinea pigs or birds, too, but I didn’t see gnaw marks. Nasturtiums have overtaken this corner like a cresting wave, but you can still see where the pumpkin bed was because the nasturtiums grow higher here (due to the concentrated nutrients rather than any change in ground level). 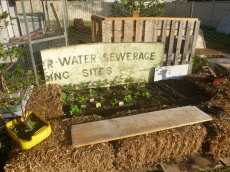 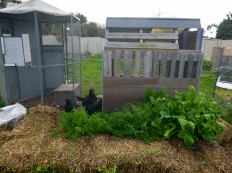 I’ve since made another strawbale vegie bed, filling it simply with bulk garden soil. It grew a crop of silverbeet, parsley, carrots, turnips and beetroot over winter. The strawbales are now decomposing nicely and I’ve pilfered some to mulch my potato bed.

This year, we’ll plant both seed and seedlings of several eating pumpkin varieties at the edge of garden beds or on top of the lawn. Lawn pumpkins need a layer of cardboard and some manure or blood and bone. The old bed from last year is now a pile of rotted straw and soil, leaving a great place to plant something else into. I’m going to add to it to form a mound for tree planting. The straw is a good growing medium for fungi and beneficial microorganisms.

I have tried growing inside the actual strawbale out on the farm, but I found that in Australian conditions it dried out really fast and I couldn’t keep the water up to it adequately. Wrapping it in plastic might prevent this, but… plastic. I’d rather have less plastic in my garden.

I’m just waiting to install the water tank and get drainage trenches dug across the yard before I plant summer vegetables, so the tank and digging machines don’t flatten the young plants. One job leads to another, especially in springtime!

I’d recommend pushing some straw bale beds together if you need a quick and easy one-season garden bed.

One response to “Giant Pumpkins in Strawbale Beds”